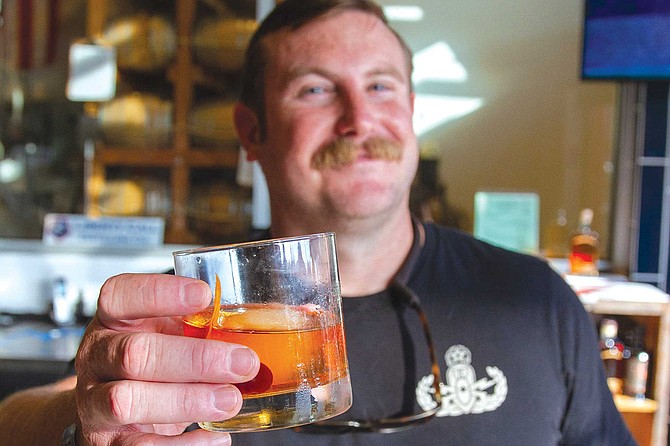 You’d never know it from his cheery personality, but Josh Christy has spent more time in the worst areas of Iraq and Afghanistan than just about anybody.

I love the Reader and I am so glad that it has continued to be a force during our unprecedented time.

Thank you so much for that. Be sure and thank Bill Manson and the entire staff for this story (“A Soldiers Spirit”, Cover Stories, September 8). I don’t look at war movies and I don’t read war stories usually, rarely. This one has absolutely touched my heart and I’m going to read it again. It is such a beautiful story it deserves awards.

It’s the first time I’ve felt comfortable to go into the war experience, and it was so human and so ordinary, and yet so special and so amazing what our service people go through and what that life is like, and what it was like for Josh Christy, and of course the animals.

It’s beyond words. I just can’t say enough beautiful words to tell you And the photos, especially the cover photo, is incredible. Please be sure and thank the photographer for that, and again thank you so much for your dedication to the publication and to serving the people of the city of San Diego. We appreciate you, we love you.

In your article (“Dennis Martinez leads the swap of guns for skateboards”, Cover Stories, September 16) you left out some of the 2nd amendment. Amendment 2 reads as follows: A well regulated militia, being necessary to the security of a free state, the right of the people to keep and bear arms, SHALL NOT BE INFRINGED. …………….this seems very simple to understand

This is an open letter to Mayor Todd Gloria (“Gloria barely escapes fine for donation reporting”, News Under the Radar, September 1). To be fair, I sent him a copy September 12th and let him know I would be sending it out to media on or after September 14th. Many of us are concerned our mayor is making decisions in a bubble of his own making, forgetting that, as mayor of San Diego, his job is to represent us all.

“Dear Mayor Todd Gloria, I have been watching you in your role of Mayor since December 10, 2020. I have to say I am unhappy with your actions. When you had Susan Davis as a mentor, and worked in career awareness and education, I was impressed. You worked very hard at creating community and consensus. You were a brave young man who was willing to talk with all people. I considered your potential future similar to Barrack Obama, a people-centered community builder with a bright future in front of you,

“You started to change after your election to District 3. Your interactions with your constituents changed greatly after losing the council presidency to Sherri Lightner. And your distance increased when you took over for Filner as mayor. Your time in the California Assembly was distant with many newsletters, but that’s true of most of our representatives.

“BUT- since you have been elected mayor of San Diego in November 2020, you have become a consummate politician, a bully, and a liar. You are no longer willing to meet with the people of San Diego and talk to use about changes you think should be made to our neighborhoods. You hide your fear of the inability to explain your ideas to the citizens of the City of San Diego by hiding changes, buried deep in misnamed sections of meeting agendas. You blame others (‘can’t stop the 30th street bike lanes because it was started by the previous administration,’ but somehow you can stop and change work on the sports arena).

“You are out and about the community – photographed here, video there – but there is a protective bubble around you – no one can get near you except for the people who agree with you. It doesn’t appear that consensus with the neighborhoods matter to you at all anymore. You have lost your touch, Mayor Todd Gloria. You are no longer a brave politician leading a group of citizens. You are now acting as a scared bully – forcing your opinions and actions on our communities without talking to us.

“You may be a Democrat, but you have forgotten what democracy is. You still have time to be brave. You still have time to be the concerned politician who reaches out to your constituents – your community members – your VOTERS, and creates a viable, safe and vibrant community for all San Diegans. You may have wonderful ideas, but there is more than one way to approach any issue, and you NEED to hear what others think. I am afraid if you don’t, people will not hear you when you ask for their votes.

“Please think of WHY you got into politics – what those early years of community meant to you. There is enough division in our world – you can help bring back unity to our neighbors by getting people to talk. You said you were proud to be a role model. It’s time for you to step up and be a role model for our city and our political system. Be a consensus builder. With hope for the future.

In response to Michael Quirk’s letter of 9-16: No Mr. Quirk, I do not go the hospital at all. I avoid the hospital like the plague. People who check in, come out in a body bag. That is because physicians are not trained in nutrition. Drugs and surgery can mask symptoms for a while but they do not address the underlying causes of illness.

The body is a machine that runs on proteins, fats, carbohydrates, vitamins, minerals and trace minerals. Deep and long standing deficiencies can cause illness, organ failure and even death. Did you know that soy lecithin granules, high in the B vitamins cholin and inositol will plummet high cholesterol like a rock? But physicians push statin drugs on us that cause the body to be depleted of another vitamin CoQ10?

A severe and long standing deficiency of CoQ10 causes heart disease and even heart failure. I can tell you are not intelligent by how you act. If you are reading all these articles then why don’t you name you sources? I have already named two. About a year ago my legs started to swell up. I did not rush into the hospital, Mr. Quirk. I did go to the doctor and he said I had circulation issues with the potential of blood clots. He recommended an MRI. I never got the MRI.

I ordered a copy of Dr Stephen Sinatra’s book: Reversing Heart Disease. He recommended Natto, which you can get at Ranch 99 Market. I also bought it in supplement form at Sprouts. He said to take it with L-Arginine powder in some water. The swelling went down right away. I am fine. Do you think I would have had such a successful outcome in the hospital? I doubt it. I can tell you are not intelligent by your antagonistic attitude. Slow people are not able to take care of themselves as I did. They buy heavily into authority figures, making gods of them. And then they blindly obey. I have no animosity towards you, Mr. Quirk. I am just stating facts. If you had approached me in a friendly, open way I would have helped you. It seems like you and your family really need the help.