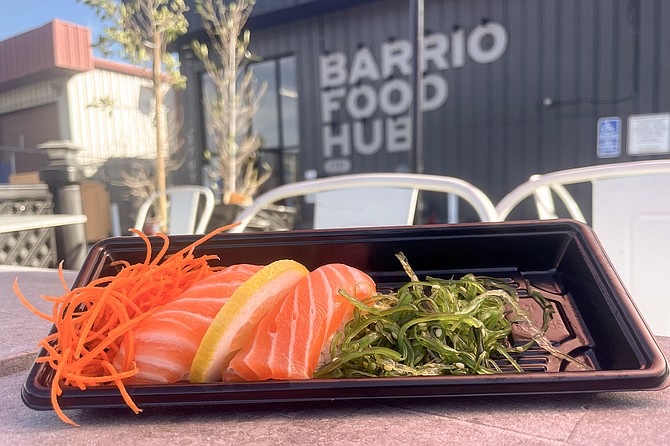 It must have been creeping toward late afternoon, because traffic began to clog the streets around San Diego’s shipyards. The early risers who service Navy vessels and other massive boats were clocking out for the day, their cars rolling over cracked asphalt and hitting the usual bottlenecks as thousands of workers decamped from this industrial corner of Barrio Logan.

From a shaded table by the sidewalk, I observed their slow progress, and waited for an order of sushi. 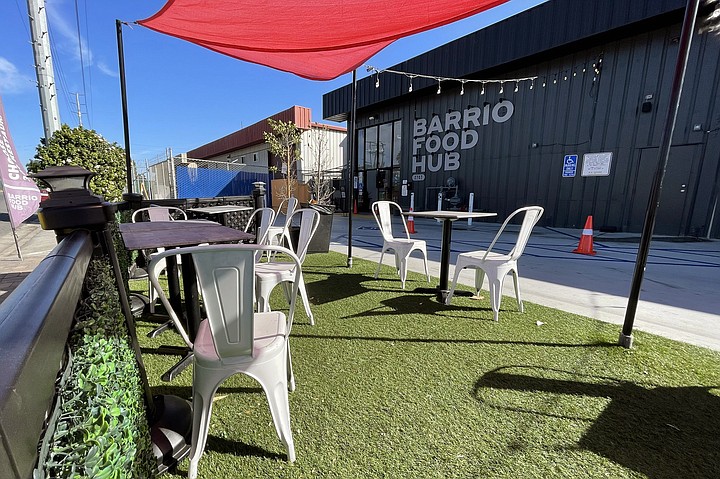 You can watch delivery drivers come and go while eating at the parklet outside this commercial kitchen complex.

I’m trying not to be surprised by unlikely food destinations anymore, but finding sushi among metal fabricators, train tracks, and dry docks is a new one. And sushi’s only the tip of the iceberg at the Barrio Food Hub. Inside the corrugated black warehouse before me, a warren of small commercial kitchens prepare the food of more than three dozen virtual restaurants.

Also known as ghost kitchens. They’re restaurants without storefronts, kitchens without dining rooms, primarily serving food to people who opt for home delivery. There’s one familiar name here: Cali BBQ, an extension of Spring Valley restaurant Cali Comfort BBQ. But the other 40 or so are new to me, even if their names make it clear what they’re about: Al Pastor Town, Burger Flex, Falafel California, and I Love Calzones, for example. 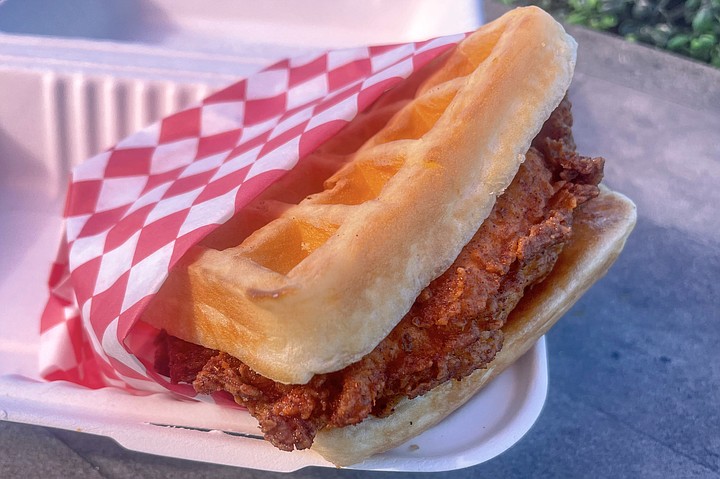 I won’t pretend I have much to say about the quality of any of these virtual restaurant brands. It would take me months to make a dent, and half of them could be gone by then. Ghost kitchens can appear, disappear, and re-brand without notice, adapting to demand.

However, so far I’ve had pretty good luck. I picked up a bacon breakfast sandwich from Bodega Brothers, which exclusively offers the sort of egg and cheese on a Kaiser roll sandwiches dished up by myriad corner bodegas in New York City. Not bad for $7. But all things being relative, I was also satisfied with the quality of the salmon nigiri from Fuku Sushi, for $6. 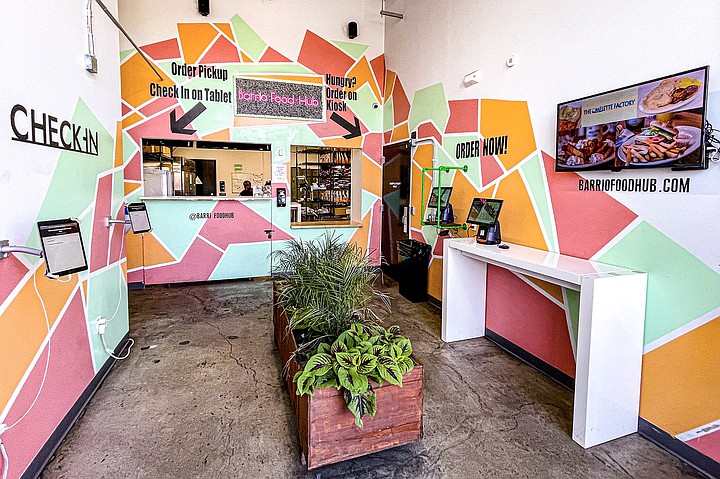 If I’d been ordering any of these brands through a delivery site like DoorDash or GrubHub, I’d never have thought to compare relative values. But that’s turned out to be one of the more interesting things about this ghost kitchen hub: you can walk up and order in person, and eat your meals in the parklet outside. There’s a colorful service counter within the front entrance of the building. It’s primarily set up to facilitate delivery drivers coming in and out to grab orders on the go, but there are a couple of touchscreen kiosks where walk-in customers may browse the menu of all 40-something restaurants. You place an order, along with your phone number, and receive a text message when it’s ready to pick up. 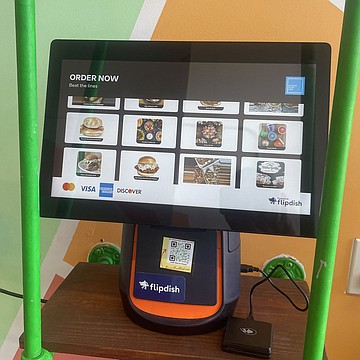 One can order take-out from more than 40 restaurants from this one touchscreen menu.

I doubt this option is meant to be used the way I did it: picking and choosing individual items from individual brands. You can’t go back and forth between menus and lump everything on one tab, so I had to ring up a series of small orders, nabbing a different receipt for each one. But this did give me a chance to explore the breadth of concepts at work here. Some of the kitchens inside Barrio Food Hub operate two or three different brands concurrently, so it’s tough to tell which are in cahoots, or in competition.

There’s a second breakfast sandwich brand, for example, called Eggwich. And another sushi spot called On A Roll. Want fried chicken? I picked up a decent $11.99 hot chicken and waffle sandwich from Hot Thang! Nashville Hot Chicken, though I could have gotten a less spicy version of the same thing from the brand Bird-N-Bun for $10.99. A little research tells me that Eggwich, Hot Thang! And Fuku Sushi operate out of similar food hub concepts in the likes of Anaheim, Long Beach, and Tempe, Arizona. So, they could be standalone concepts, or each could employ dozens of marketing concepts.

It’s dizzying and mysterious, and the streets by the harbor do get busy in the 2 pm hour. But if this isn’t the potential future of the restaurant industry, it’s our convoluted present.