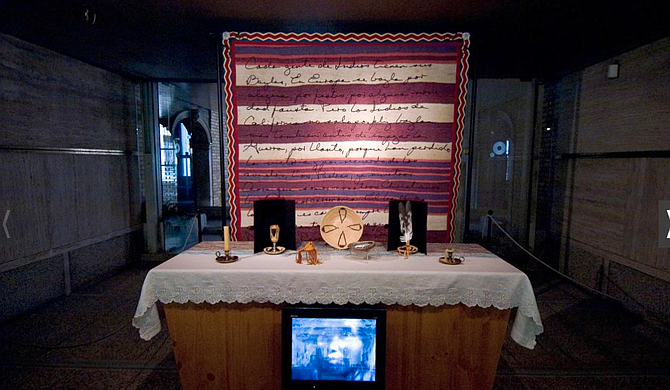 Chapel for Pablo Tac, mixed media installation by James Luna at the Venice Biennale, now in the National Museum of the American Indian at the Smithsonian.

On June 8, 2021, the Oceanside Unified School District Board of Education announced that it will consider renaming San Luis Rey and Garrison Elementary Schools (combined during the 2019/2020 school year due to sinkholes at Garrison) one of the top three name recommendations of Dolores Huerta, Pablo Tac, or John Lewis Elementary School. 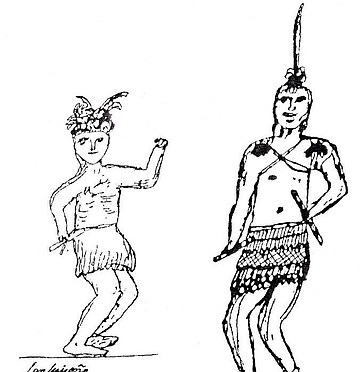 Who is Pablo Tac? Tac was a Luiseño Indian (Payómkawichum). His home was Mission San Luis Rey, founded on June 12, 1798 by Father Junípero Serra’s predecessor, Father Fermín Francisco de Lasuén, the eighteenth of the Spanish missions established in California.

Soon after the Mexican period began, Pablo Tac was born and baptized on January 15, 1822. On January 17, 1832, he left San Diego with the pastor of Mission San Luis Rey, Father Antonio Peyrí, and another Luiseño boy, Agapito Amamix, for the College of San Fernando in Mexico City, where they would stay from November 12, 1832-January 15, 1834.

In February 1834, the three of them departed for Rome from the port of Veracruz, the same port Junípero Serra entered when he arrived in Mexico in 1749. Their ship stopped in New York, France, and Barcelona — where Father Peyrí disembarked — and after eight months of travel, the two boys reached Rome.

On September 23, 1834, Pablo and Agapito enrolled at the College of Propaganda [today known as Urban College].

Pablo Tac’s writings are the earliest from a California Indian. While in Rome studying for the Catholic priesthood, Pablo wrote a description of life as a mission Indian (“Conversion of the San Luiseños of Alta California”, c. 1835), gave a public recitation of a poem at the Polyglot Academy (c. January 1836), in Sequoyahesque fashion created a dictionary of the language of his people (“Prima Linguae Californiensis Rudimenta a P. Tak proposita”, c. February 1838), and wrote an account of the native peoples in Southern California (“De Californiensibus”, c. after 1838).

While researching for my first book about Junípero Serra, the founder of the first nine Catholic missions in California, I came across the writings of Pablo Tac. Born and raised in California, I was shocked that I never heard of him before.

In June 2012, a building at Mission San Luis Rey was renamed Pablo Tac Hall, in honor of its native son.

According to Fr. J.M. Carillo, author of the 1959 book The Story of Mission San Antonio de Pala, relatives of Pablo were living and Karl Kottman anotes that the memory of Pablo remained as recently as 1993-1995, when he was the principal at Pala Mission School. After I gave a presentation to members of the Tekakwitha Conference about Pablo Tac in Ohio in summer 2019, an audience member shared with me after that she knew someone who knew someone who knew Pablo Tac well and prayed to him often (I have been on a search to track this person down ever since).

According to a February 16, 2021 article in the Coast News, the SLR Renaming Citizens Advisory Committee began calling for name submissions in January 2021. Over 300 names were offered by members of the community.

The committee initially did not include a member of the local California Indian peoples until it was recommended to do so by Benjamin Prado and Karen Plascencia during public comments at the February 9, 2021 board of education meeting.

The committee narrowed it to three names: Huerta, Lewis, and Tac. After brief presentations on the three proposed names, on June 8, the Oceanside Unified School District Board of Education voted 5-0 to name the combined San Luis Rey and Garrison Elementary Schools after Pablo Tac.

Author’s note: In June 2020, I finished walking the 800-mile California Missions Trail, the route that connects the twenty-one Catholic missions founded by Franciscan priests between 1769-1823. I prayed often to Saint Junípero Serra (he traversed an estimated 24,000 miles, much of it on foot and in pain). I also prayed to Pablo Tac.

Where refugees in California are arriving from – FOX 5 San Diego