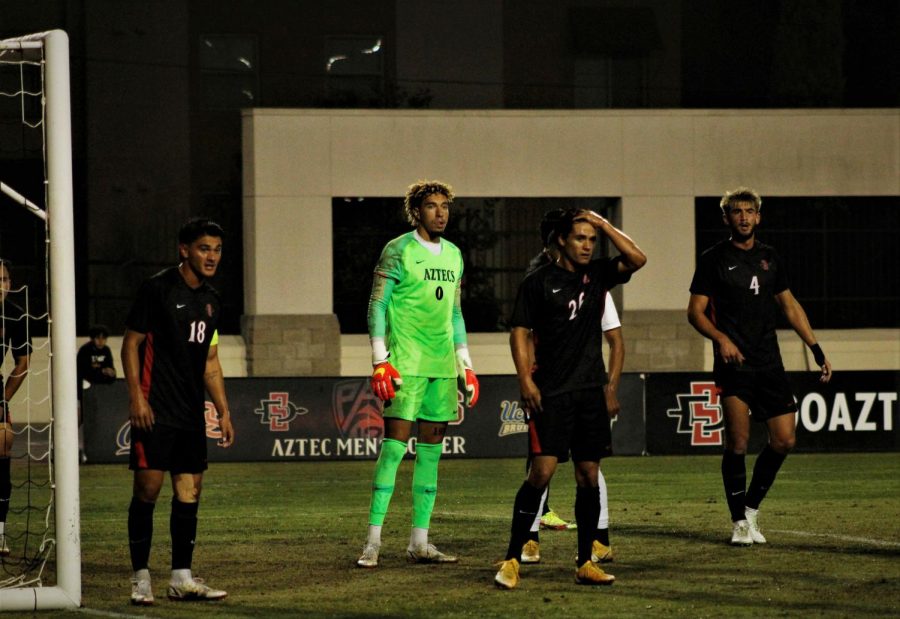 Jacob Castro (0) stands with his teammates in anticipation of a corner kick during a match against Oregon State. Castro made 66 saves on the season and posted a .805 save percentage.

The kid who grew up getting his clothes caked in mud was now sitting on the sidelines with a clean jersey.

Before spearheading one of the strongest men’s soccer teams San Diego State has seen, sophomore goalkeeper Jacob Castro was a member of the University of Washington.

Born and raised in Tacoma, Washington, Castro didn’t plan on becoming an Aztec. He wanted to be a Huskie.

Constant rainfall drenched his hometown, making the playing fields muddy and his clothes sopping wet. But he didn’t mind.

For it was in the rain-soaked mud fields of Tacoma where Castro first discovered his passion for soccer.

“When I was younger, I’d like to dive around in the dirt back in Washington,” Castro said. “It would rain a lot, so the field would get really muddy and I would have a lot of fun diving around and getting all messy.”

Castro wanted to replicate that childhood fervor during his college career. As a Huskie, he thought he would have that chance.

“I always wanted to go to the University of Washington ever since I was a kid,” Castro said. “My parents had an influence as well as they wanted to watch my games in-person. I really loved the campus, the coaches were really good guys and the team was great. It really attracted me to go play for them.”

Playing time was hard to come by, however. The environment was great and he considered his teammates to be his brothers. The Huskies even made the NCAA Championships in back-to-back seasons, finishing in the Elite Eight both times.

He redshirted in the first season. But the second season only saw Castro take the field twice.

If he wanted grass and mud stains on his jersey, a change of scenery was necessary.

As a child, his life revolved around soccer. Castro grew up watching his hometown Seattle Sounders and would begin to watch the Premier League when he entered Spanaway Lake High School.

In high school, he found another sport he could excel in: football.

As a senior, Castro served as both a wide receiver and a punter. He caught 20 passes for 295 yards and five touchdowns while his longest punt went for 56 yards.

While he preferred staying on the soccer pitch, Castro’s time on the gridiron didn’t go unnoticed as he garnered some attention out of Spanaway Lake as a potential college wide receiver.

However, another opportunity came knocking, bigger than any college football opportunity. While playing for the Washington Premier F.C. — a club team located in Puyallup, Washington — a coach of his contacted the Sounders to gauge the team’s interest in the young keeper.

Coaches for the Sounders attended one of Castro’s games and, liking what they saw, offered him a chance to play for their developmental soccer squad known as the Seattle Sounders Academy.

Upon arriving at the academy, a wide-eyed Castro got a first-person perspective on what it took to make it to the pros.

“They would kind of put you in this professional environment. The coaches were very professional, the players as well, especially with how they maintained their bodies and how they do nutrition,” Castro said. “I came in pretty inexperienced and I learned a lot from the academy.”

Castro spent 2017 training with the academy before making two appearances with the Seattle Sounders FC 2 squad in 2018.

With professional training under his belt, Castro set his sights on college soccer. While he had plenty of offers from different universities, he kept the fields he dove around in as a kid in the back of his mind.

When the University of Washington — the school he grew up wanting to attend — came calling, it didn’t take much for him to pledge his allegiance to the Huskies.

But after two seasons, the issue of playing time arose and Castro was faced with a tough decision: stay with his childhood school or bet on himself and transfer to get more action?

Castro chose the latter and entered the transfer portal. Once again, coaches came calling, gauging his interest and selling him on their visions of the future.

SDSU head coach Ryan Hopkins was the man who sold Castro on the potential of SDSU. Castro saw it himself, as the Aztecs were a Pac-12 team along with the Huskies and were one of the two teams he got to face on the field.

“I chatted with Ryan Hopkins and he went over everything that he was trying to do over the next few years and what he is trying to build here at San Diego State,” Castro said. “I was bought in and I believed him. And we’ve been doing that.”

In Hopkins’ first year as head coach, SDSU went 1-7-2 with three one-goal losses. In his second year at the helm, SDSU went 8-7-2 with an improved offense and a more experienced roster.

It also helps that his starting goalkeeper has been one of the best to don the Scarlet and Black in a long time.

Yes, San Diego may not get as much rain as Tacoma. Its fields may not be as muddy either. But, for at least 90 minutes on gameday, Castro gets to do what he has always wanted to do: dive around and play soccer.