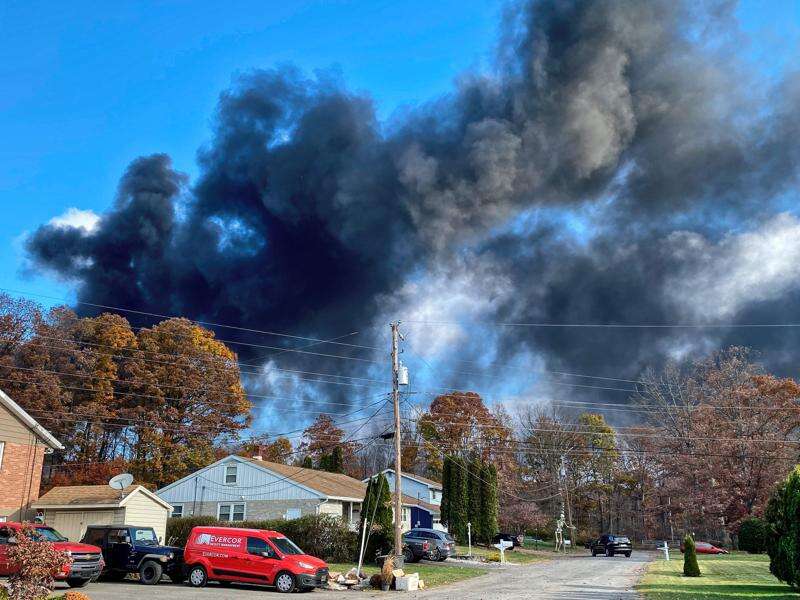 Cleaning and construction workers were on scene Thursday at Highwood USA after a three-alarm fire Wednesday.

Reached by phone, an employee of the company at 87 Tide Road declined to comment on when they would be back to normal operations or provide an update. The company makes outdoor furniture and other items.

A post on the company Facebook page thanks firefighters and others for their help. It says all employees and first responders who responded are safe. The company thanked the community and businesses for donations. Those needing to contact Highwood may email inquiries@highwood-usa.com, the statement says.

“Today was a day where all the fire companies in the surrounding areas worked together to keep each other and the people from Highwood safe. The dedication that comes from these fire companies working together does not go unnoticed,” the statement reads.

The fire was called in to the Schuylkill County Communications Center at 9:25 a.m. Firefighters from Schuylkill, Luzerne, and Carbon counties were on scene, including representatives of both Schuylkill and Carbon’s Offices of Emergency Management.

Employees were evacuated to an area away from the fire, which could be seen from as far away as downtown Tamaqua.

Hometown Assistant Fire Chief and incident commander Dave Crewell said the fire was caused by employees burning items outside in a pit that got out of hand. The fire was under control at 1:15 p.m. and cleared at 4:30 p.m. but not before “just shy of 3/4 of a million gallons of water” were used.

Crewell said the water came from the Tamaqua Water Authority and was supplemented by tankers. The plastics burned hotter and kept reigniting, he said. An estimate on the amount of foam used was not available.

Crewell said he didn’t have a damage estimate and would let the insurance company determine one.

In addition to structural damage, there was 3 inches of water in the building. He said people were on scene doing cleanup work Thursday.

Firefighters returned twice Wednesday to ensure the fire had not reignited.

Crewell said it was truly a team effort by all counties and people involved.

“I just want to thank everybody for all their help,” he said.

Smoke billows from the Highwood USA plant in Hometown Wednesday. See a video at tnonline.com. DONALD R. SERFASS/SPECIAL TO THE TIMES NEWS

Please wait while we attempt to load the request page